Hillsboro, Wisconsin, a community with a population of 1,400, holds many memories for Aaron Hammer. He grew up in what’s sometimes called the Czech capital of the state, a small, rural area wedged snuggly between rivers and woodland in the beautiful hill country of southwestern Wisconsin.

And now, Hammer’s working there, doing his best to help residents get quality health care. As the director of facility operations for Gundersen St. Joseph’s Hospital and Clinics in Hillsboro—about 90 miles from Madison—the magnitude of the work matters more than the size of the facility. 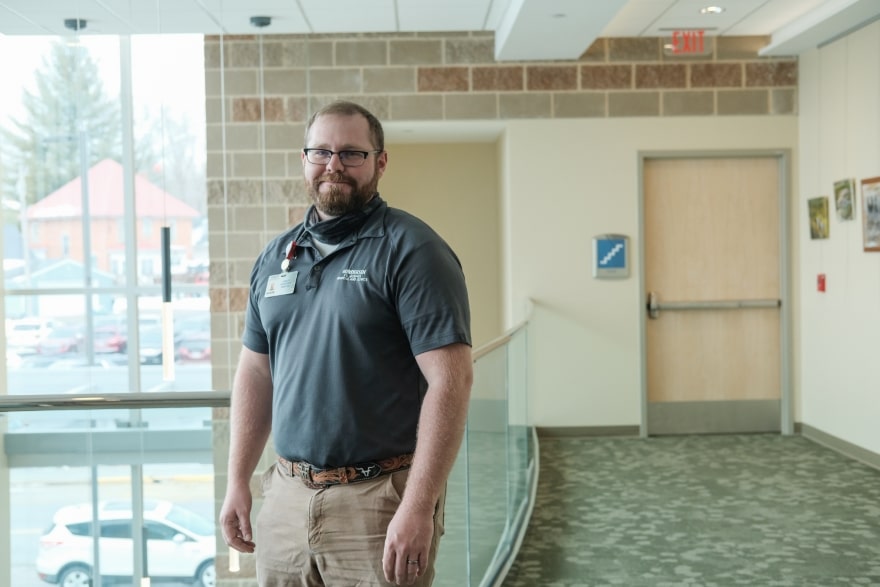 “This is my hometown, and our new building is responding to a pressing need with the continuing pandemic,” says Hammer.

The original hospital was constructed in 1951. Although it had seen many upgrades throughout its history, it was at the end of its useful life and needed to be replaced with a new facility built for the modern delivery of health care.

The new $33.1 million hospital and clinic facility sits adjacent to the site of the original hospital, which was demolished—the rubble is ground up and used as fill for the new parking lot. The design of the new building follows the curvature and landscape of Hillsboro’s Field Veterans Memorial Lake, and because of its closeness to the shore, the inpatient rooms are cantilevered over the foundation.

The old facility’s largest section was a 65-bed nursing home that had been converted into a rural health and specialty clinic. After 15 years of discussions, Gundersen Health System’s board of trustees determined a new structure was needed. The old, three-story building was long and narrow and had received multiple additions over the years. The new hospital is two stories and built to take advantage of improvements in healthcare technology and efficient work practices to deliver better, cost-effective care. 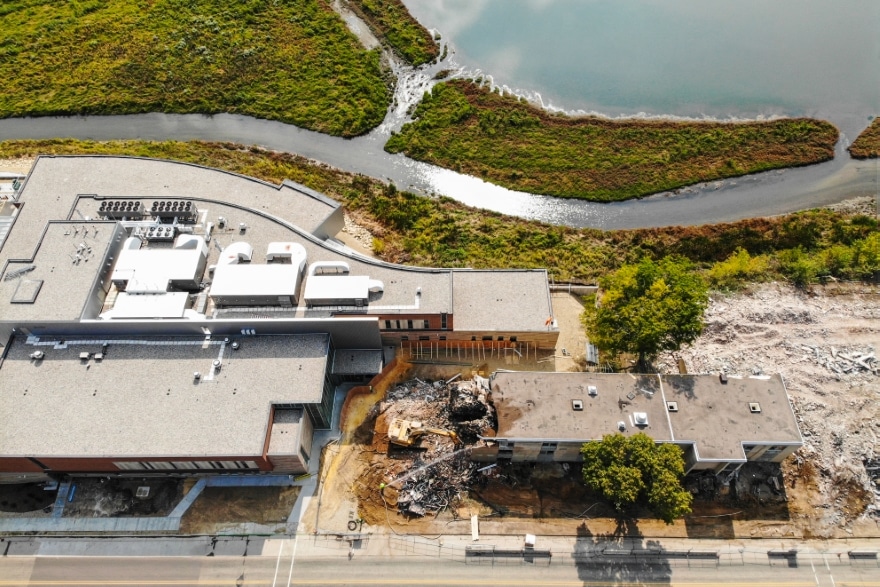 “We’re fortunate to have a rural health clinic, specialty services clinic, surgery center and a rehabilitation gym,” Hammer says. “We were able to fit so many services into our square footage. Rooms are designed to be adaptable based on changing needs, and departments that collaborate frequently are positioned next to each other to improve workflows.”

He adds that plans also include a public lake walk that will extend from one end of the campus to the other, along the shore. One section will go under the cantilevered part of the building, which he says is a unique feature. This part of the project will be completed by summer of 2021.

Construction was in its final phase when the COVID-19 pandemic hit in March 2020. Work slowed, but it gave Hammer and his team the opportunity to modify patient rooms to have more negative pressure, limiting the spread of contagions and setting the new facility up to better handle an airborne pandemic. Despite hour restrictions and furloughs, the hospital opened in June 2020, and the organization’s entire operation moved into the new facility over two days.

Settling into the new building and keeping it looking new—including maintaining the landscaping that was installed in the fall—is a major focus for Hammer in 2021. But watching the grass grow and tidying up planters and beds aren’t the only things he’s doing.

Gundersen St. Joseph’s has started planning for a new outlying rural health clinic building in an adjacent community, and Hammer is also hard at work on a new solar project that will improve the hospital’s energy efficiency.

Because the new hospital is located between a lake and a state highway, installing the 100-kW rooftop array will be a challenge. The only viable rooftop access, he says, is between the hospital’s receiving dock and emergency entrance. 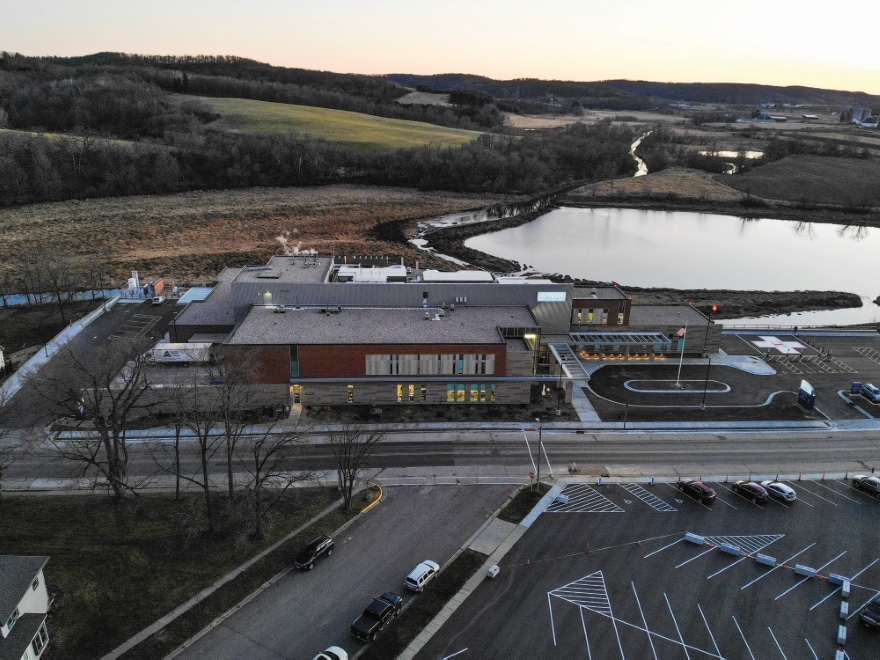 “This is probably the busiest area of the campus, so getting solar panels installed on the roof isn’t going to be easy,” Hammer notes.

He hopes to have the plans completed by the summer and the array installed by July of 2021.

Building a career in construction

While working in health care wasn’t always his goal, some might say it was fate that Hammer ended up where he is.

As a small child, he remembers going to visit his grandfather after school. On one wall in the house was a plaque with a screwdriver on it, an award presented to Bob Kouba when he retired from the facilities department at Gundersen St. Joseph’s.

“It’s the same department I’m running,” Hammer says with joy. “At the time, I didn’t understand what he did, but I’m so happy to follow his legacy now.” 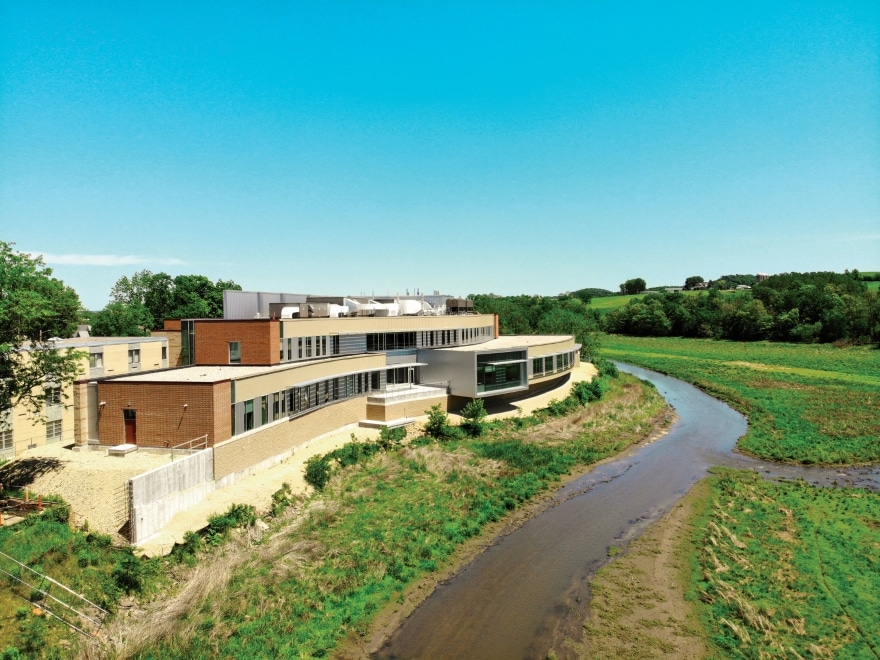 First, though, he’d earn his degree in agricultural business from the University of Wisconsin-Platteville. Having grown up on a farm, Hammer was used to working on and repairing equipment and solving problems creatively and cost-effectively, two skills that serve him well in his current role.

He joined Gundersen St. Joseph’s in September 2017, just as the planning of the new building was getting started, and he had to hit the ground running. He was a crucial member of the planning team involved in the architectural design process all the way through to completion of construction.

And for the medical center in his hometown, Hammer wouldn’t do anything less. 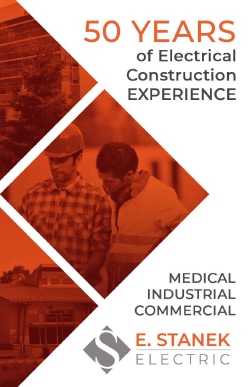